Everything you need to know about 3 Phase Hybrid Inverters

Everything you need to know about 3 Phase Hybrid Inverters

Inverters are one of the best things that have been invented. There are many benefits of having an inverter at your home or office. However, there are many different types of inverters available in the market. These inverters can differ in size, performance, capabilities, and efficiency. So what is the best type of inverter you can attach with the solar panel? Then one of the best batteries you can consider adding to your solar panel is the hybrid inverters.

What are Hybrid Inverters?

It is essential that you add an inverter with the solar energy system. The inverter aids with converting the direct current electricity generated by the solar system to the alternate current. This alternate current (AC) will now run the appliances present at your home.

What is a 3 Phase Hybrid Inverter?

A 3 phase hybrid inverter is a device that can be attached to the solar panel and gives a lot of benefits. This inverter acts as a typical inverter and converts the direct current into the alternate current. After converting it into an alternate current, the inverter distributes it to 3 phase power supply. What is a 3 Phase Power Supply?

Nowadays, most modern homes have 3 phase wiring grids. This means that 3 phase homes need more energy and pull more energy from the grid for the home appliances to work. It is perfect to handle huge voltage loads such as air conditioners, electric car charges, pool heaters, and other big things in the home.

What are the benefits of 3 Phase Hybrid Inverters?

Having a 3 Phase Hybrid Inverter can be very advantageous for your home. Following are a few benefits that you can get from these hybrid inverters. Minimizing voltage problems: Since the 3 phase hybrid inverters break the voltage into three different ways, it lowers the weight of the voltage. When the electricity goes through three different pathways, there is less possibility of getting extra voltage to the appliances and causing damage to them. Therefore, these inverters minimize the voltage problems due to heavy load.

When there is a surplus of load on the inverter, it can cause them to trip. Hence, causing a blackout in the home. But when you use the 3 phase hybrid inverter, they help to reduce the load by giving them three pathways. So when the load is reduced from the inverter, it minimizes the tripping of the inverter.

2. Can be used with larger solar panels:

3. Do you need a 3 Phase Hybrid Inverter? 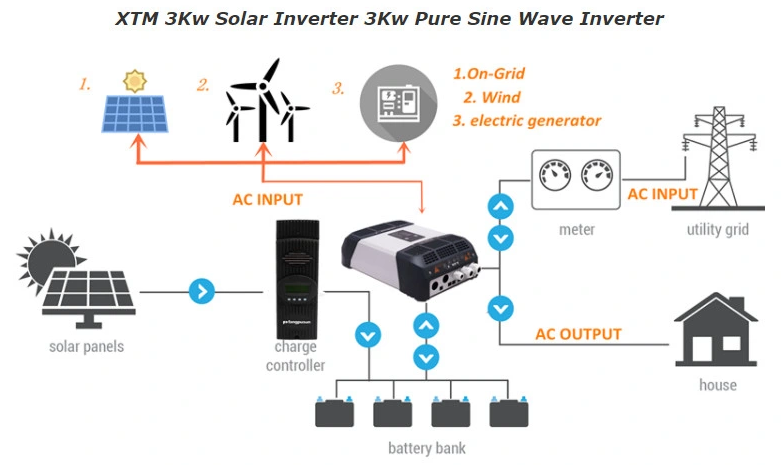 Where to get the best 3 Phase Hybrid Inverters?