Why does my RV inverter make noise？Can I mute it?

Why does my RV inverter make noise？Can I mute it?

In the solar PV system, the main source of noise is the inverter, if in the space is more open, broad environment we can well avoid these noises, but in the narrow space of the rv, how do we deal with the noise of the inverter?

The source of sound when the inverter is running.

The sound of an inverter running comes from two main sources. The first is the inductor, the second is the cooling fan, the third is the transformer. When an electric current passes through an inductor, it produces a sound; The fan is used to dissipate heat, so when the fan runs, it makes sound.

Why is the inverter running so loud

Car friends said that its inverter running sound is very loud, there are two possibilities, the first inductor design is not reasonable, with the load will produce high frequency sound, is similar to the "ZI ZI ZI" sound;

So, is there a mute inverter?

If the low-power inverter does not have a cooling fan, the running sound is very small and can be ignored, but 99% of the inverter over 500W will have a fan. Of course, the higher the load power, the faster the fan runs, the louder the sound will be. Therefore, completely silent inverter is basically no, we can do is to do a good fan quality, good logic design, so that the sound generated by the inverter running less and less. 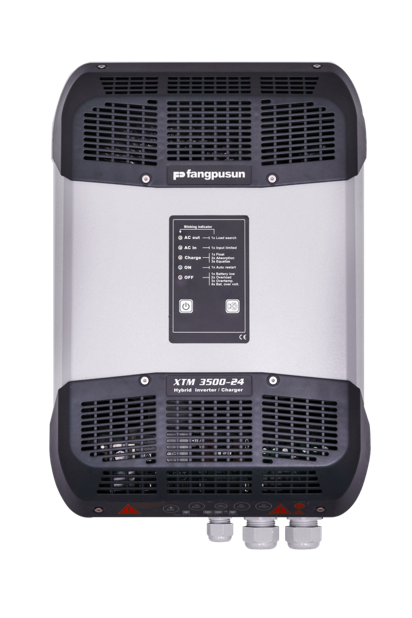 The XTM2000-12 and XTM2000-24 in the Fangpusun Xtalent Hybrid Inverter/Charger series are suitable for RV, with a normal operating noise decibel of about 40dB. When the temperature reaches 55℃, the cooling fan will be started, and the noise will rise to 45dB. It is believed that in the living area of the RV, the noise received by the XTM inverter will be lower.

Noise level of 30 ~ 40 dB is relatively quiet normal environment; Anything above 50 dB can interfere with sleep and rest. Due to insufficient rest, fatigue cannot be eliminated, and normal physiological functions will be affected to a certain extent. More than 70dB interfere with conversation, resulting in upset, mental disconcentration, affect work efficiency, and even accidents; Working or living in a noise environment above 90 decibels for a long time will seriously affect hearing and lead to other diseases.