Xtalent is an inverter and charging integrated machine designed by Fangpusun. The idea behind it: Xtalent can combine the power grid with all the other volatile clean energy sources like solar and wind to minimize grid dependence while providing stable power, even when the grid can't. 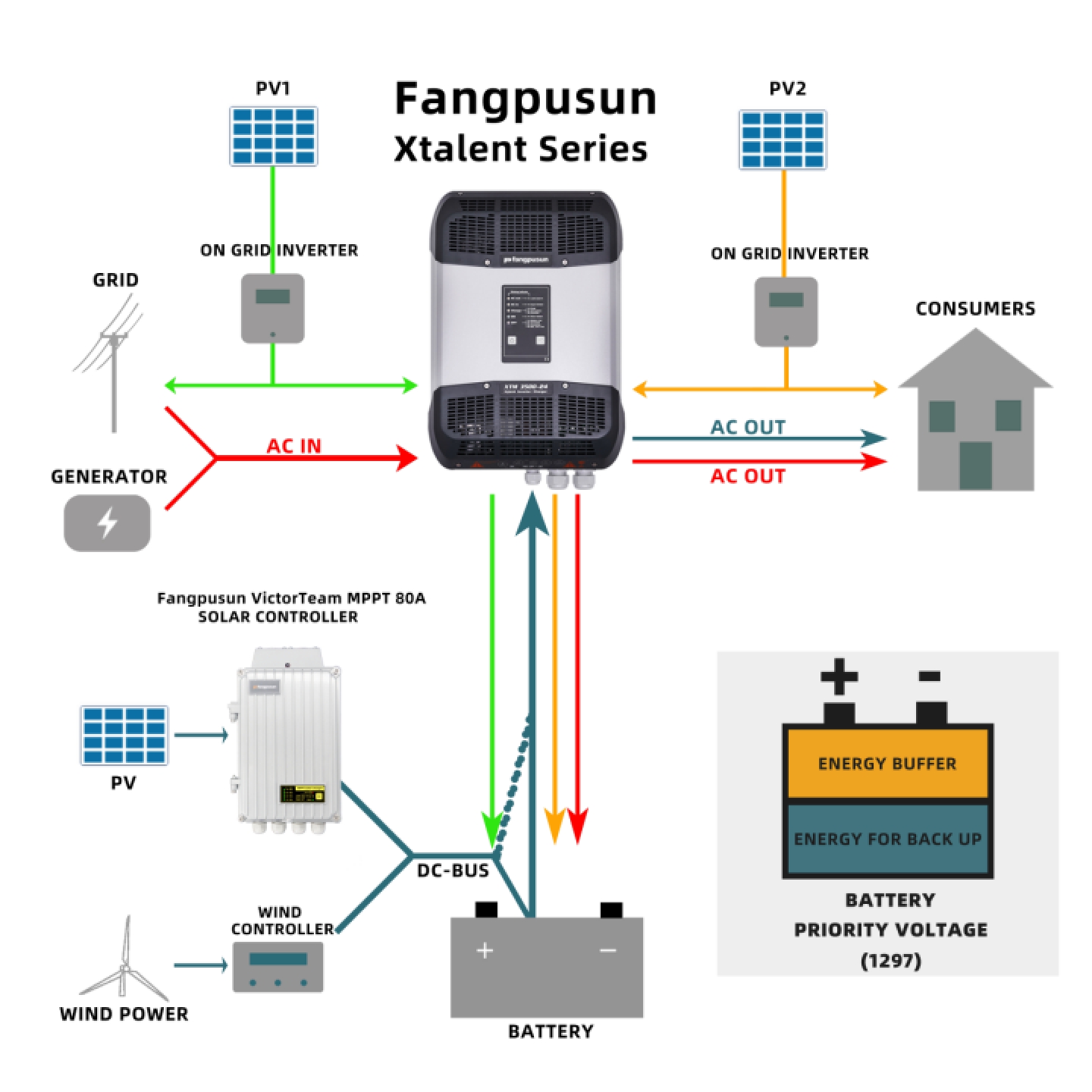 As you look into Xtalent, you might wonder if Xtalent can power your entire home during a power outage?

Yes, Xtalent can temporarily power your entire home, but it depends on which appliances are running at the same time. A Xtalent HybrId Inverter/Charger xth8000-48 has a continuous output power of 7000W. It can withstand the load of 21000W at an instant. It is suitable for the start of inductive load. For example, the old air conditioner needs to generate a large peak power surge in the first few seconds to start the device. A single XTH8000-48 can easily power your entire home if your appliances are always under 7 kW, either 120 V or 240 V. If it is more than 8kW, a small power Xtalent can be connected in parallel to increase the output power.

What is the Utility of Xtalent Hybrid Inverter/Charger? 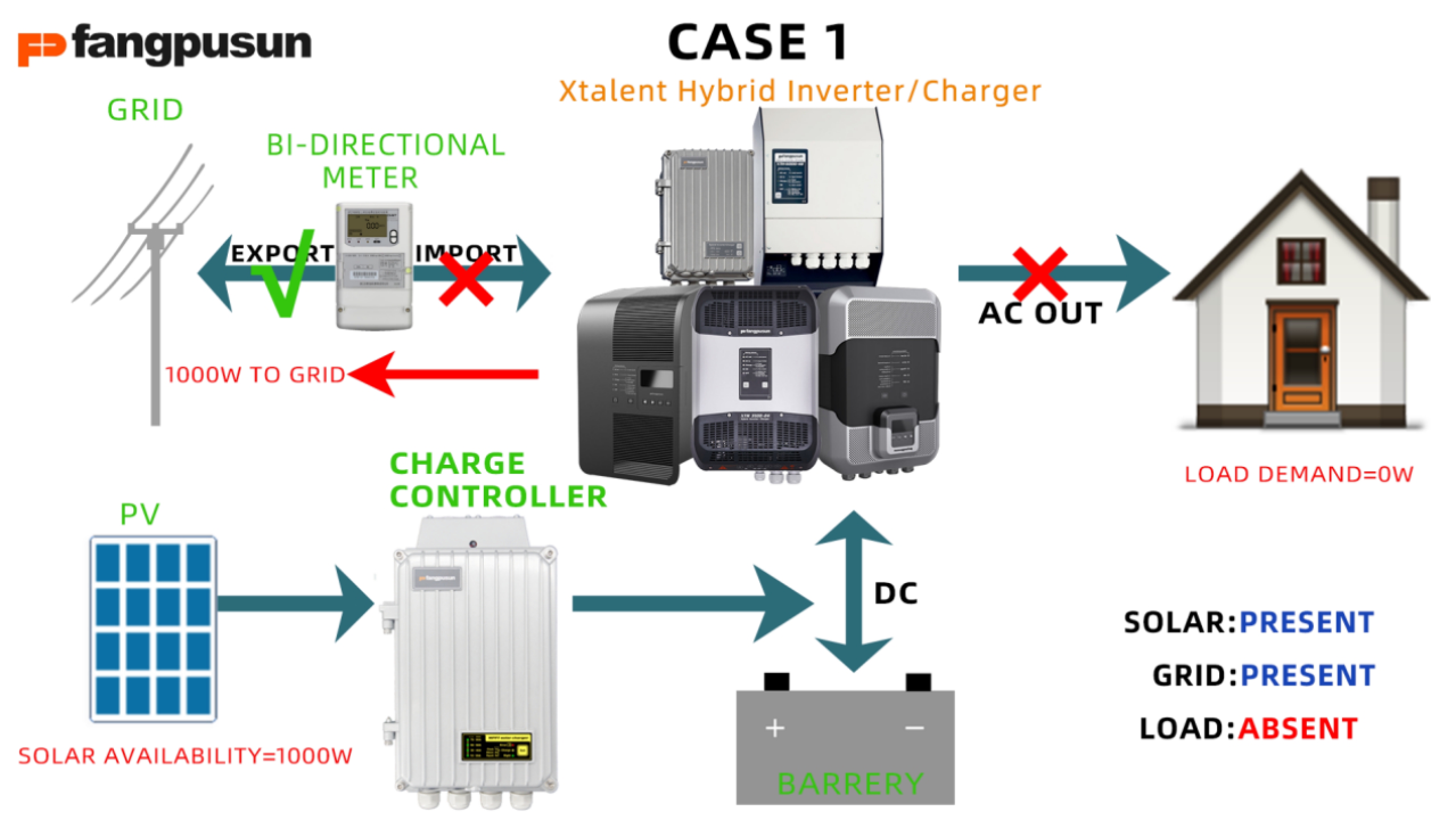 The Fangpusun Xtalent Hybrid Inverter/Charger works as a PV On-Grid Inverter to charge the grid without a load. 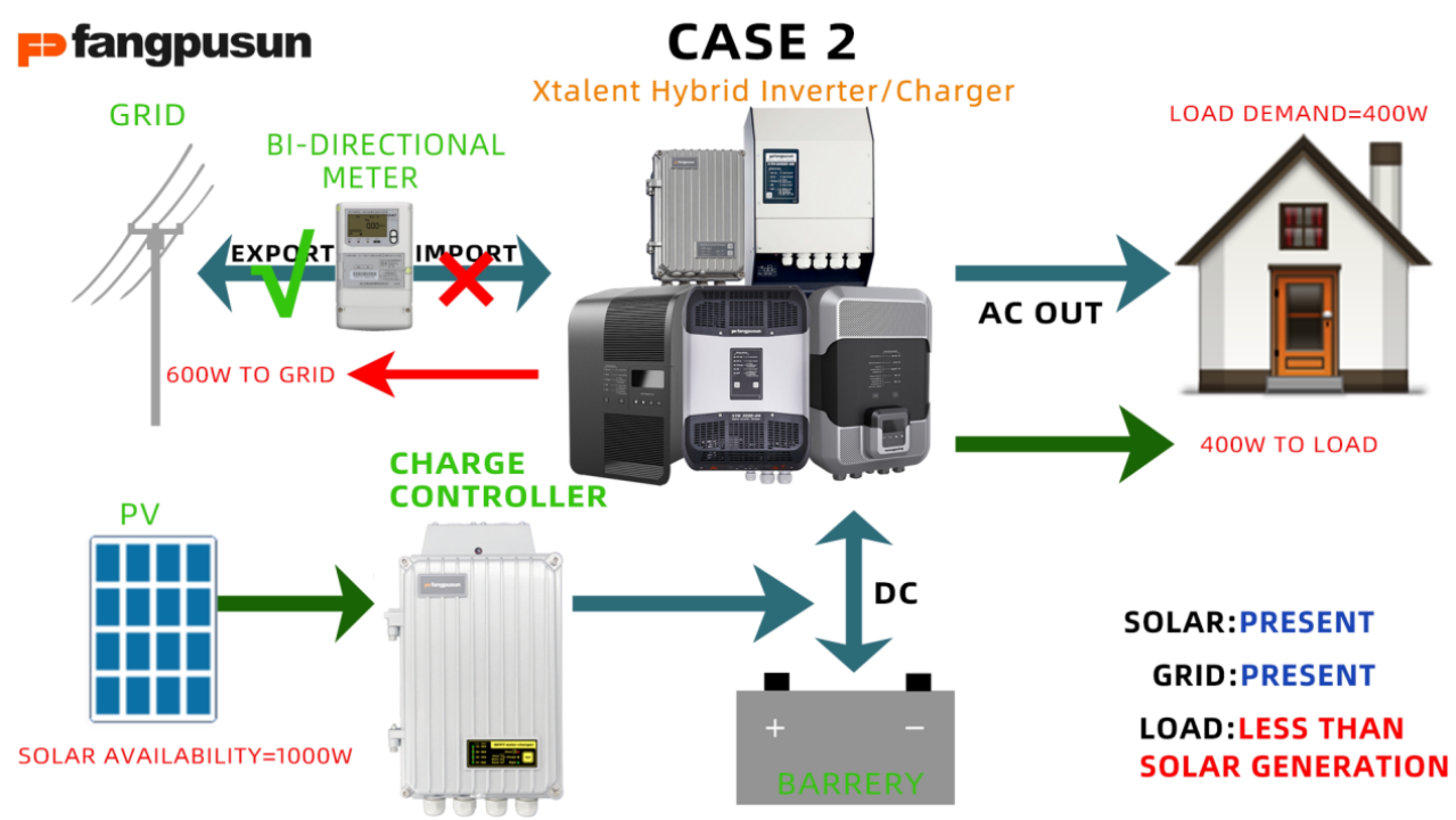 When the load is less than the power generated by the PV, the Fangpusun Xtalent Hybrid Inverter /Charger charges the excess power to the grid. 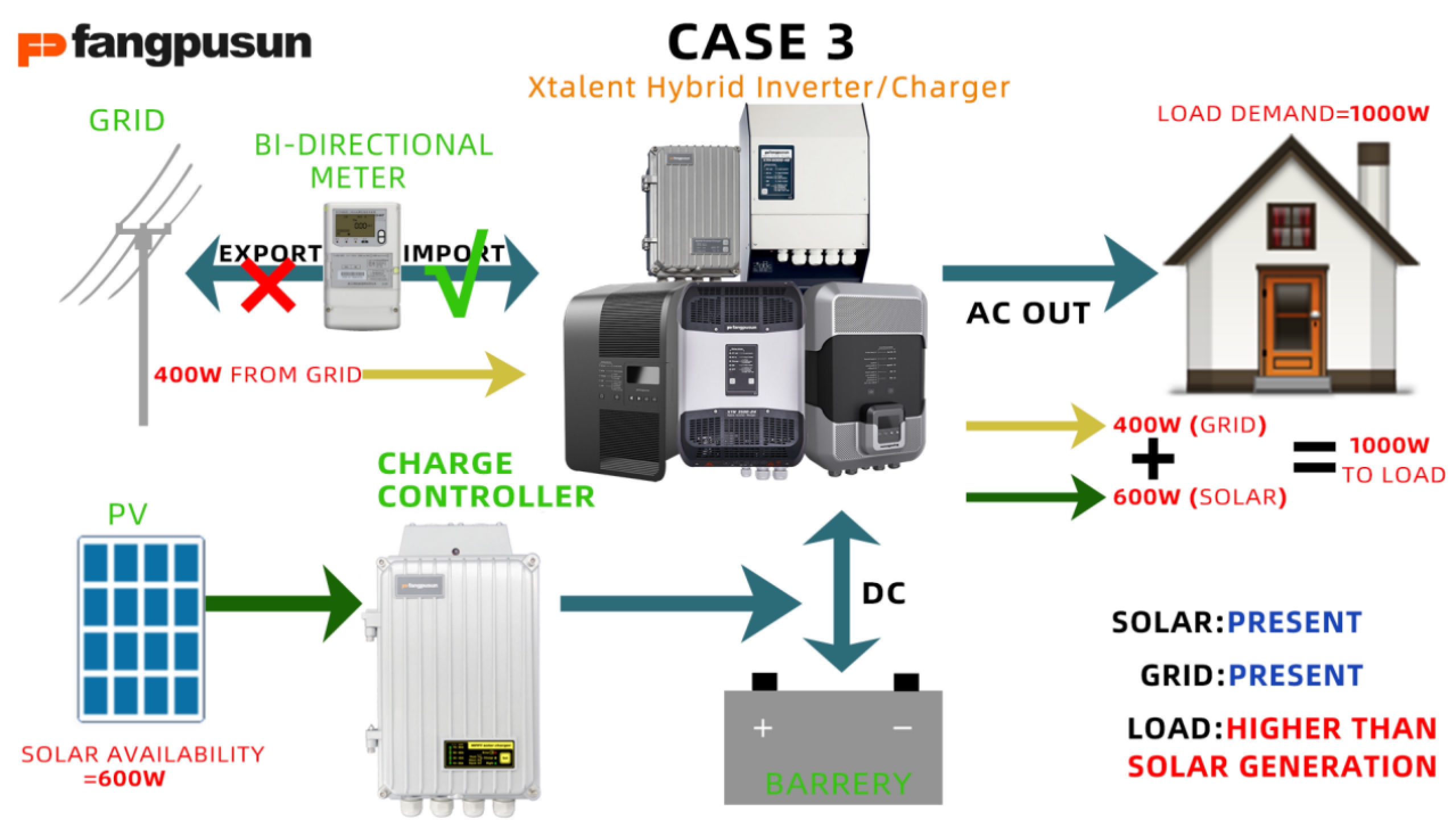 When the load exceeds the power generated by the PV, the Fangpusun Xtalent Hybrid Inverter/Charger uses the grid to make up for the missing power. 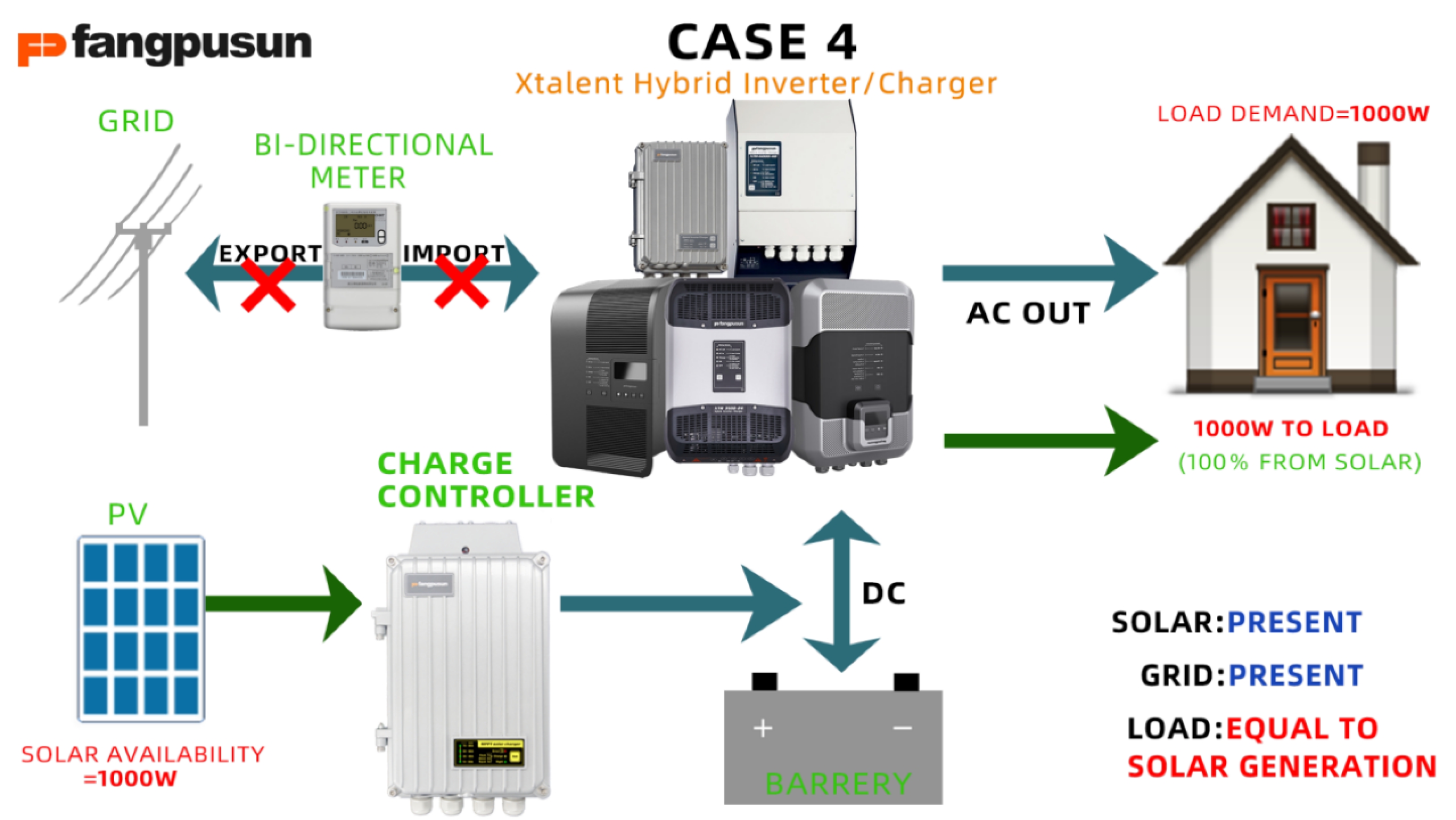 Fangpusun Xtalent Hybrid Inverter /Charger will provide the load first and will not charge or demand power from the grid when the load is equal to the PV power generation.

When the power grid fails, the Fangpusun Xtalent Hybrid Inverter/Charger can starts up. 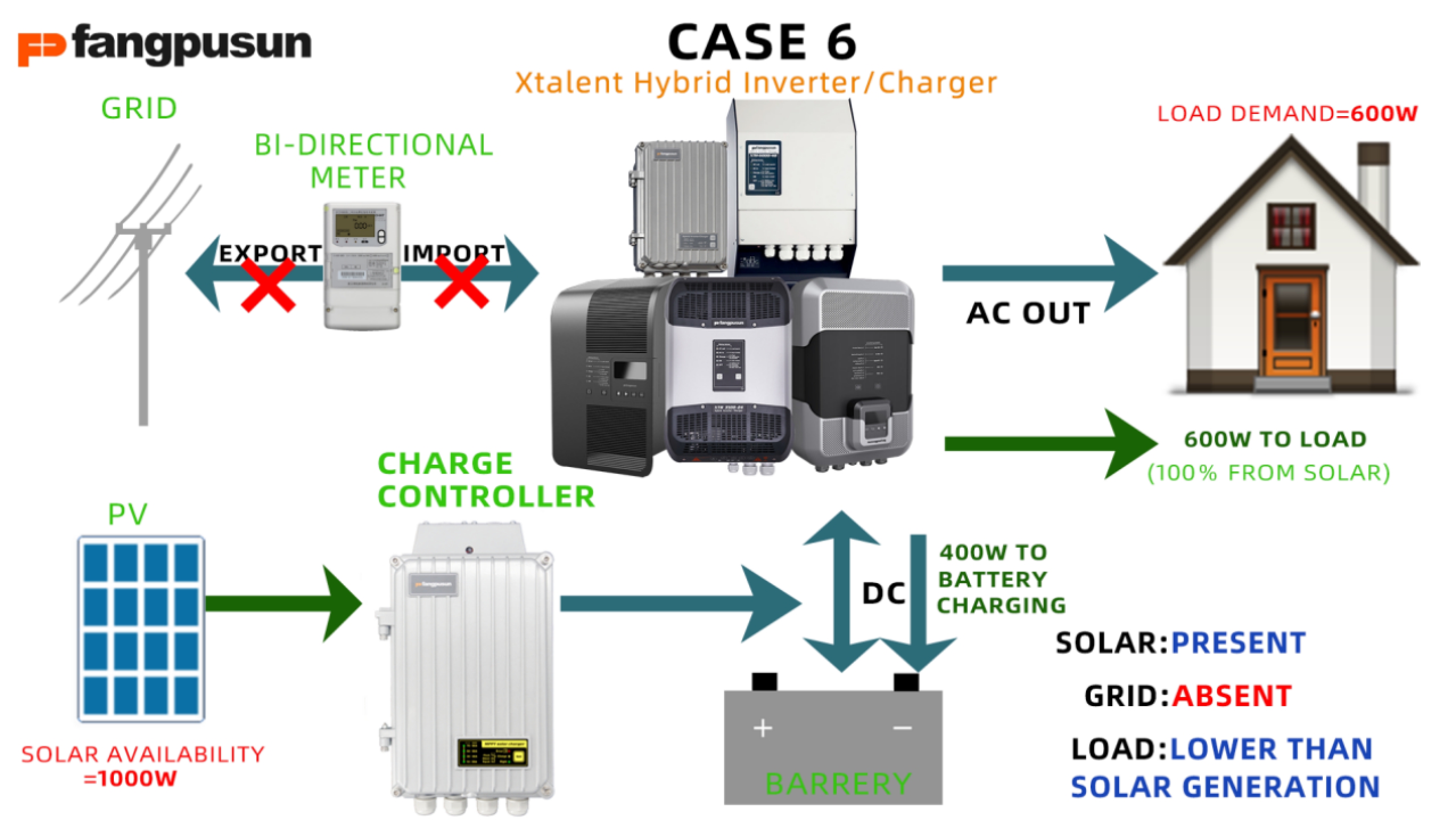 When the grid fails and the load is less than the PV output, the Fangpusun Xtalent Hybrid Inverter /Charger stores the excess power in the battery. 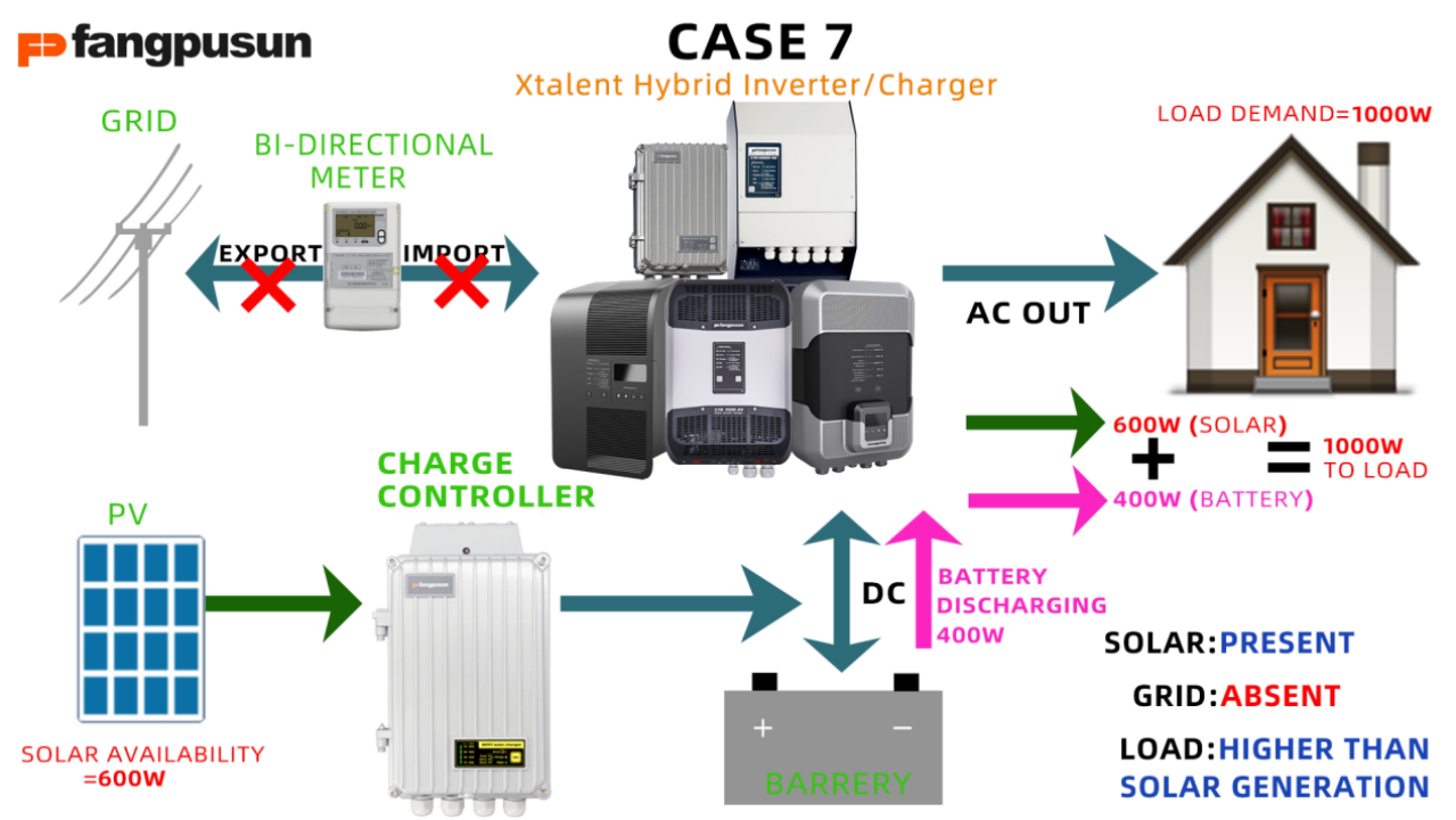 When the grid fails and the PV produces less power than the load, the Fangpusun Xtalent Hybrid Inverter/Charger takes action to capture the rest of the power in the battery.

When the grid fails and the PV fails to generate power, the Fangpusun Xtalent Hybrid Inverter /Charger turns into a pure off-grid Inverter that uses batteries to power the load.

As mentioned above, Xtalent is mainly connected to the grid, batteries, and loads. With unstable clean energy, Xtalent basically allows you to maximize the escape from the grid, even when the grid is out of action, still maintain power.

Xtalent can be used with devices and scenarios

First, it has to come with batteries. Secondly, you can install a clean energy system such as solar, wind, or hydroelectric power as you need it. You can also use it with a generator.

The function Smart-Boost enables to add to the source the inverter power, like for instance a genset or the shore power.

· Possibility to undersize an AC source (for example a generator).

This application note describes how to use renewable energy in a backup system, even when the system is connected to a grid and grid feeding is not possible.

· Ideal for backup systems with renewable energy where there is no feed-in tariff or where grid feeding is not possible.

· Use all of the available renewable energy.

· Direct use of renewable energy without cycling energy in the battery(-ies) to avoid their premature aging. 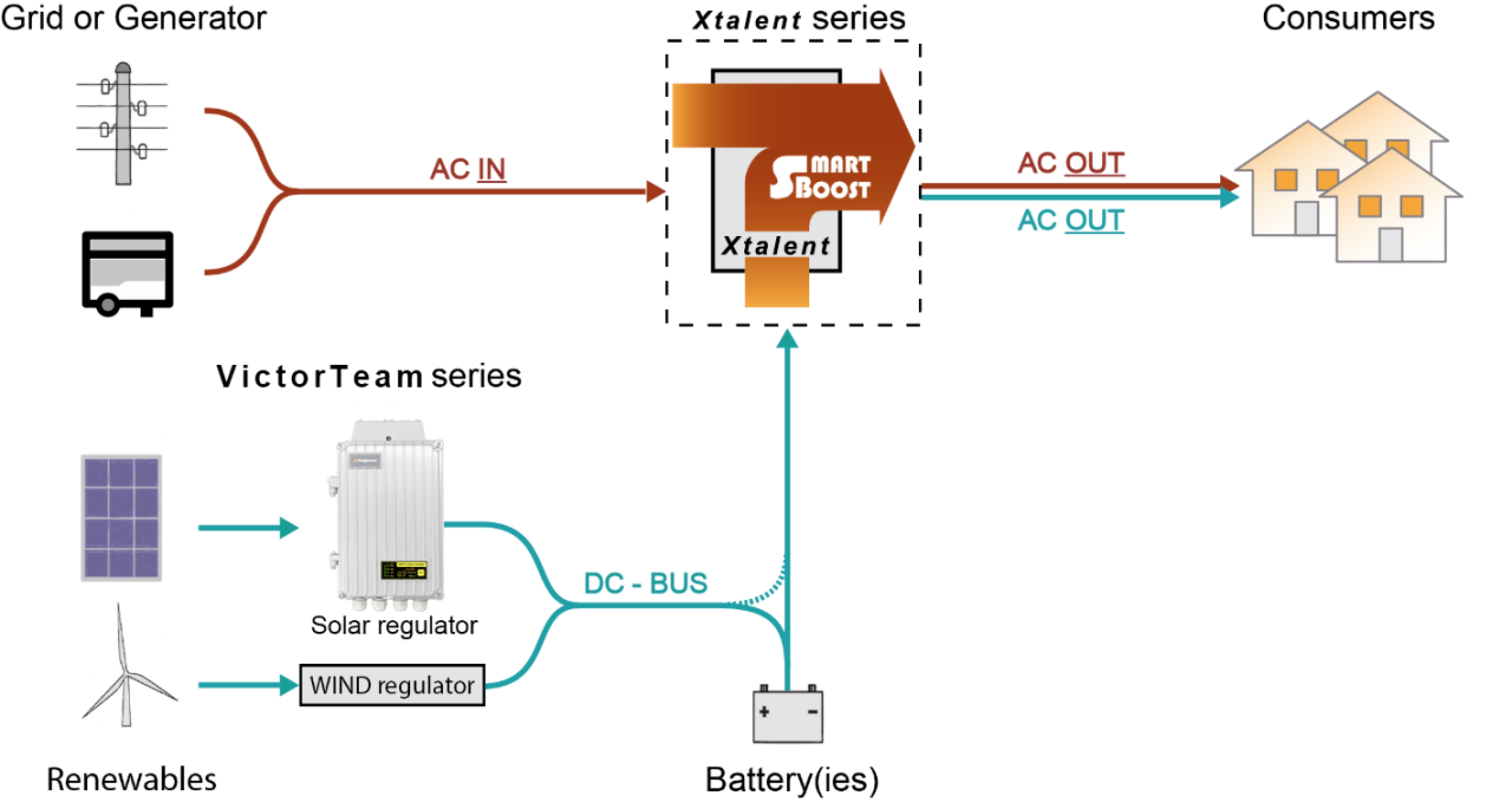 • Automatic switch between two different energy sources and possibility to program the two different currents of the two ac sources.

• Presence of a mechanical interlock module that ensures in all cases no short circuit on the sources.

This application note will help you to set your Xtalent for an automatic start of a generator as per different parameters such as output power, level of battery voltage, or a

• Activation according to one or multiple events : 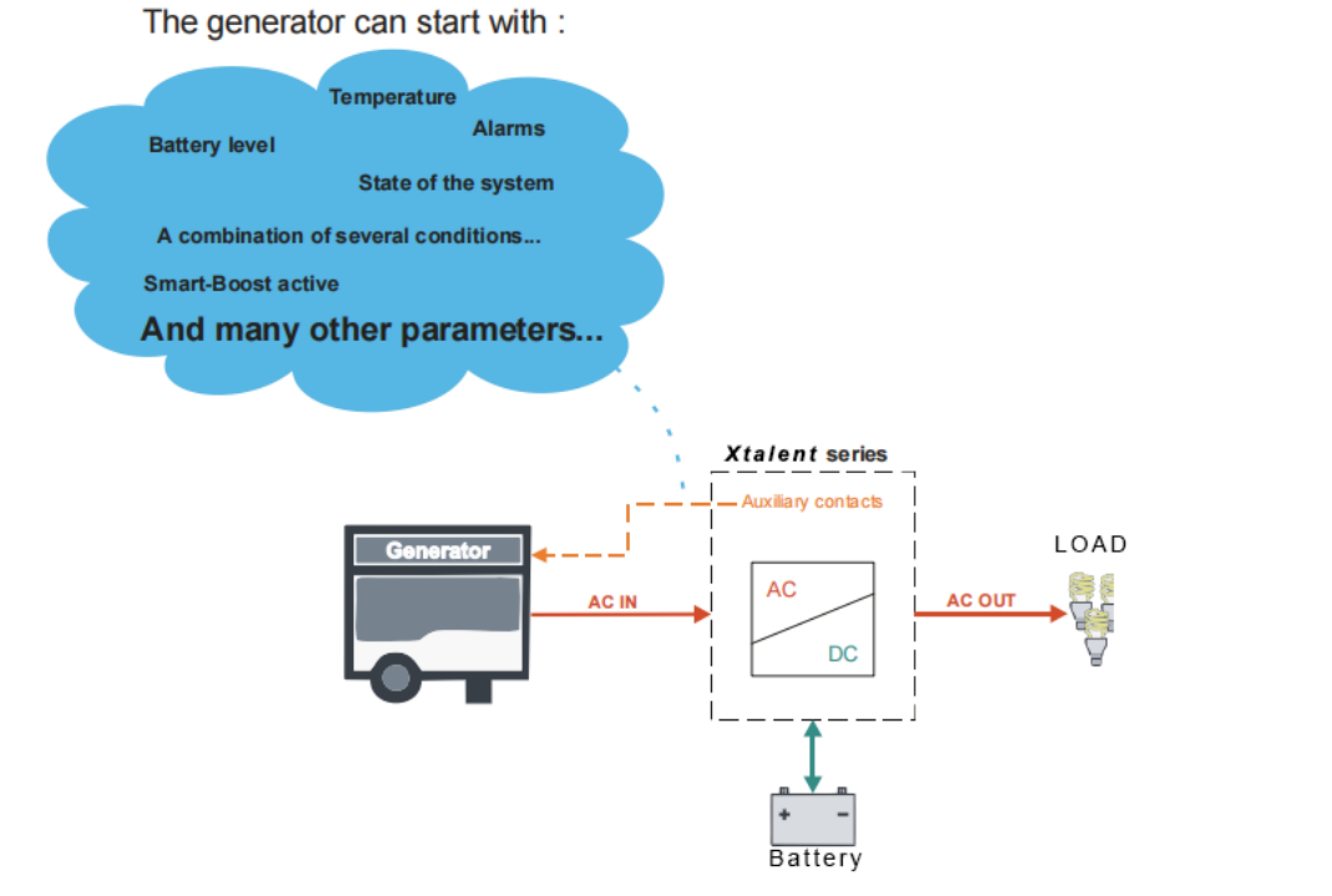 When 1 Xtalent can't meet your power, or you want to compose a three-phase power supply. Then you can have two Xtalents supporting the same battery voltage or three Xtalents of the same specification connected in parallel to form a single phase to increase power.

When 3 phase power supply is needed, 3 up to 9 can be connected into three phases, and the output power will also increase.

However, when it comes to using multiple Xtalent devices and it still can't run your home alone, it should still be considered a backup or emergency power supply (UPS).

When asking whether Xtalent can power my entire home, there are a few things to consider. Which equipment will be running, whether it will be a inductive load, for how long, how long Xtalent will need to support the power needs of your home, and how many generating devices are powering. As long as the configuration is proper, the AC terminal and clean energy input are combined. Xtalent is a very effective choice to meet the power supply of a family!